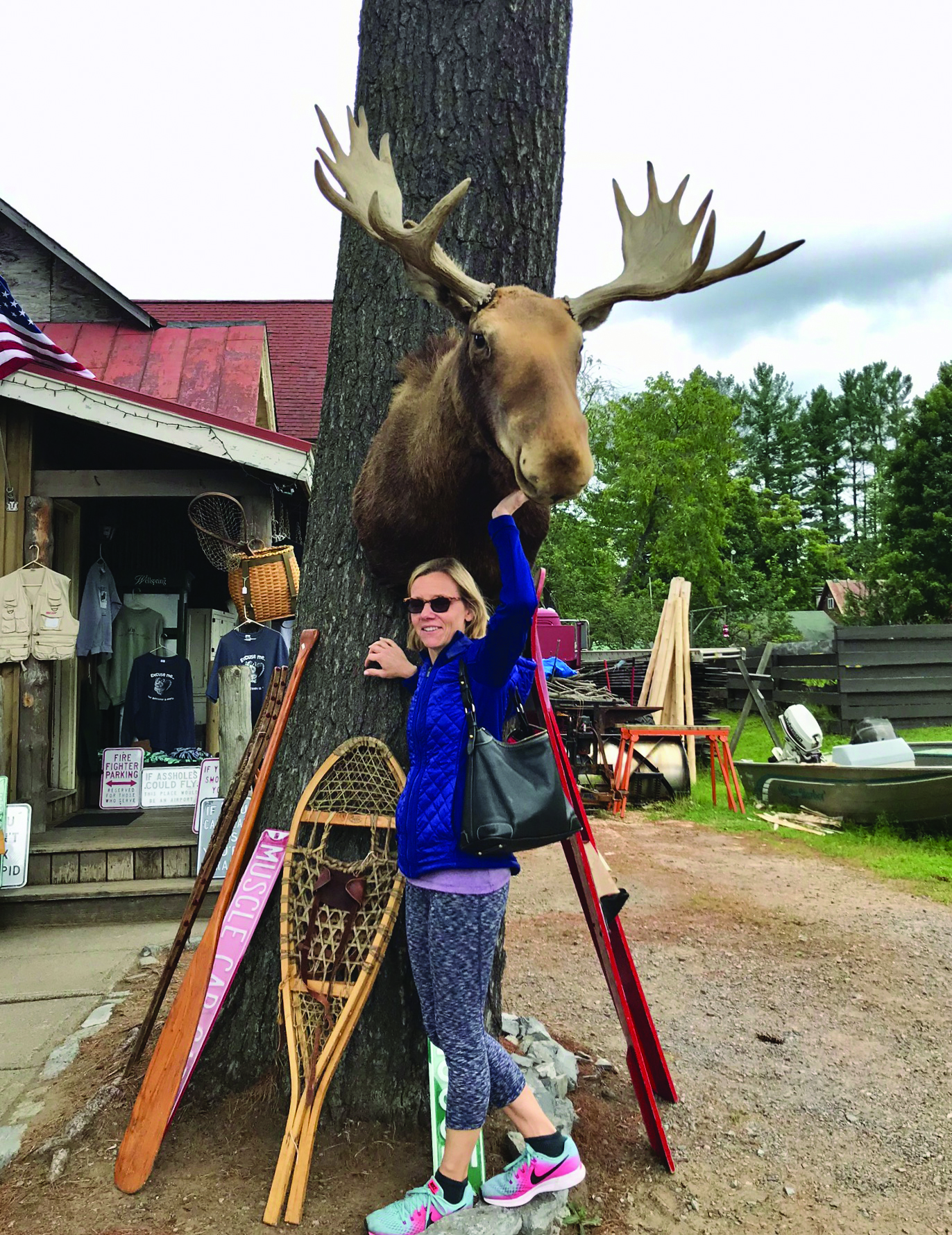 When your bestie comes to camp for the first time

I admit it was a bit of an ambush. “Make a loon call,” I commanded my friend Maria, shoving my phone up to her mouth and pressing record.

Together with my 20-year-old daughter, Maddy, we were sitting at the gate at San Francisco International Airport, awaiting our cross-country flight to upstate New York, where we would drive to the Adirondacks for a week’s vacation. Every year during the last week of August, my entire extended family attends Family Camp at YMCA Camp Gorham, in Eagle Bay, and two decades of living on the West Coast has never been a deterrent for me.

But this year, once again, the mid-August start date of our younger daughter’s high school meant that she and my husband would have to miss Family Camp, a place I’d been using as a personal reset button since 1968. It had occurred to me that 2018 was the perfect opportunity to have Maria fill one of their empty cabin bunks. Maria and I met on our first day of freshman year of college in her hometown of Philadelphia. While she’d heard plenty about the mountains and Family Camp over the course of our 30-year friendship, she had never set foot in the Adirondacks.

I had long ago lost the Adirondack forest for the trees, but realized her visit to camp represented an opportunity of another sort: to see the Adirondacks for the first time again, through Maria’s eyes. First, though, I had to establish a baseline of what she knew about the mountains. I’d developed a short questionnaire to administer before we left San Francisco, to document her expectations and knowledge. Hence, the bird-call ambush.

What came out of Maria’s mouth at the airport was not a loon call, or perhaps it was the call of a loon on helium and held at gunpoint. She guessed that there were 42 traffic lights in the Adirondacks (there are maybe a dozen), she guessed that the High Peaks were when Uber fares were most expensive, and she thought a punky was the word for “a state of not feeling well.” On the other hand, she knew the years for both of Lake Placid’s Olympics, correctly defined no-see-ums, complete with pantomimed itching, and accurately guessed that Adirondack delicacies would include maple candies. As a test subject, she was ready.

Maria and her family are intrepid tent campers back in California, so I wasn’t worried about how she’d cope with the rustic charm of Laurel Cabin, where my clan stays. It’s one of the original lakeside structures built by Bill Dart in the waning years of the 19th century, back when Dart’s Camp was established as a summer resort for city vacationers. Sure, there isn’t a shower, and yes, there are approximately 17 of us sharing two bathrooms, and true, someone is always slamming a door, particularly if you’re trying to sneak a nap. But hey, there are also bunks, with mattresses pre-softened by generations of kids during the regular Gorham summer camp season. And my sister brings a coffeemaker. Compared to tents, Laurel Cabin is like the Ritz.

As for her reaction to the Dining-Hall food, we are two moms with five children between us. If someone else is doing the cooking, we will give you a five-star Yelp rating regardless of what you serve us.

I was, however, a little concerned about how well Maria would do at keeping up with the pace of activities at Family Camp, which could conservatively be termed “frenetic.” From the 7 a.m. Polar Bear Swim until the square-dance caller finishes the last square at 9:30 p.m. and Family Campers head up the road to patronize the local taverns, there is little time to pause. And whatever you’re doing, there are always three other options somewhere on the camp’s 1,500 acres calling your name: paddleboards, horse barn, hiking, archery, crafts. I assured Maria she could do as much or as little as she wanted, but one activity was non-negotiable: Polar Bear.

“Do I have to?” she asked me the night before, shivering visibly under her parka.

“Only if you want to stay in our cabin and not have my entire family make fun of you for the week,” I answered.

“If you want to get the Polar Bear Certificate at the end of the week, you do.”

“Wait, there’s a certificate? I’ll do it!” Maria answered.

The next morning we stood shoulder-to-shoulder in our bathing suits on the dock, conserving body heat and working up the nerve to go into the lake as other Family Campers splashed around us. They’re a friendly bunch and counseled Maria with copious and conflicting advice that the best thing to do was to jump in the icy cold water all at once, or to lower herself in slowly, or to stay in and swim laps, or to get right out again.

Finally Maria hurled herself into the Adirondack air and landed in the lake, surfacing with a shout. It wasn’t the shout I expected.

“This is WAY warmer than Sweden!” she yelled. Maria’s parents are Swedish and she spent childhood summers splashing around in Swedish lakes. “You had me so worried!” she said, kicking onto her back to start a languid lap swim. Inexplicably, I was insulted. Our Adirondack lakes aren’t as cold as Sweden’s? Fine. But just remember the U.S. got gold in hockey in Lake Placid in 1980, and the Swedes only got the bronze.

Maria did Polar Bear every day that week. Another daily ritual was her search for moose, wherever we went, on or off camp property. They’re her favorite animal, a potent symbol of her Swedish heritage. I didn’t have the heart to tell her that in five decades of visiting the Adirondacks, I’ve never once seen a moose. “Truth in advertising,” she sighed to me on the last moose-free day. “The next lake over is Big Moose, right? And there are moose all over every gift shop we went to. There should have been actual moose.”

What there is in abundance, and to her surprise, are lakes. “I know New York has the Finger Lakes, but I had no idea the Adirondacks would have so many lakes, and that they’d go on and on,” she said to me.

We got to see all those lakes from the three spectacular vantage points of Bald Mountain, Black Bear Mountain and Rocky Mountain, aka the Fulton Chain Trifecta. Family Camp’s volunteer hiking guide—my cousin George—stood up on the first day of Family Camp and said that anyone who completed those three hikes during the week would be presented with a nifty cloth patch to commemorate the achievement.

The week went by too fast, as it does every year. After stocking up on maple candy in Old Forge and one last visit to the Northern Lights Creamery, in Inlet, which is owned, coincidentally enough, by the sister of Maria’s college roommate, it was time to head back west.

As I’d hoped, bringing Maria to camp was a chance to see the Adirondacks, and Family Camp, anew. Filling Maria in on its history, my siblings and veteran Family Campers shared stories with her I’d forgotten or never heard. Like how in the mid-1970s our cars had to be escorted by law enforcement down Big Moose Road past Moss Lake, when members of the Mohawk Nation were occupying the former girls’ camp there, or how acid rain had decimated bird life in the area in the early ’80s. One night we went to a presentation on the camp’s history that I probably would have skipped had Maria not been there, and saw historic photos that traced the development of the place I’ve loved for so long.

The mountains let me see my friend of three decades in a new light, too. I had never appreciated how motivated Maria is by the promise of certificates and patches. From now on, when I need her to do anything for me, I’m just going to print out a quick certificate from my computer and promise to write Maria’s name in once she cooperates.

I also got a reminder of my friend’s kindness and generosity. My mom is 85, and we can never take for granted that she will be with us at Family Camp the next year. When Maria presented Mom with a stuffed moose to remember her by—she was that determined to have a moose sighting, I guess—it was another of the painfully bittersweet moments at camp that seem to come more frequently as I get older.

But there’s no reason to cry. Because Family Camp is only ever a year away. And whenever Maria calls me, my new ring tone is her impression of a loon. 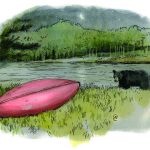 Close Encounters of the Lean-to Kind 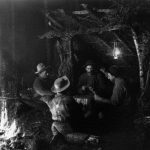 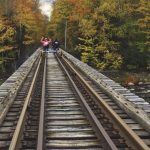 Pedals to the Metal 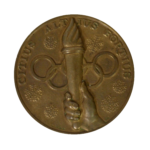